Resurrecting the Past: The General Electric Model 3-5091A Cassette Recorder 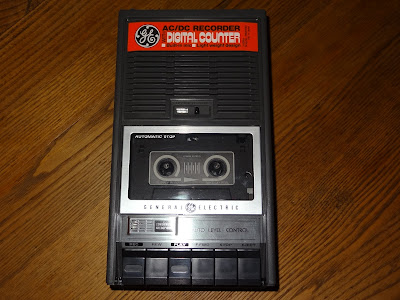 Two years ago in Important Dates in History: March 17, 1981 I wrote about the day that I got my first cassette recorder. It might not have been an actual "important date in history", but it was indeed a very important day for me. I had wanted a tape recorder for some time. It might seem like a strange thing to want in the current age of smart phones, the Internet and instant streaming of anything you could ever want to see or hear. But in 1981 there were no smart phones. The Internet would have seemed more like a fantasy of science fiction than reality. And the closest thing there was to streaming was the VCR (video cassette recorder). I would have loved to have had one of those, but at the time they were still pretty new...and very expensive. The humble cassette recorder was a convenient way to capture audio and play it back whenever you wanted. Does that sound terribly exciting? Probably not. But it was something that I really wanted to do. I wanted to make my own "radio shows". I wanted to record my favorite songs off the radio (meaning putting the tape recorder microphone up to the speaker of the radio--not directly recording from the radio). I wanted to record parts of movies, shows and even commercials off the TV (using the same method as recording from the radio). 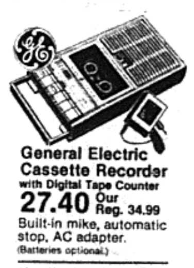 After my parents took me to a store to buy my tape recorder on that St. Patrick's Day of 1981 I became somewhat obsessed and started recording my little heart out. It was used so much that after a few years it started to show some serious signs of wear and tear. I replaced it with a cheap model that worked so poorly that the first one was pressed back into emergency service. By 1985 it was finally retired for good when we got our first VCR (which allowed me to actually record the sound AND video of everything on TV) and I had gotten a double-cassette recorder/bookshelf radio (which allowed me to record songs directly from the radio).

Around 25 years later I recovered hundreds of old tapes from my parents' house along with the original General Electric tape recorder. I had thoughts of listening to all those old tapes on the actual unit that they were recorded on all those year ago. Unfortunately it was in surprisingly horrible shape by then. I remember retiring it when the play button didn't want to lock in place, but it still did work (more or less). But now it was covered in dust, the battery compartment cover was missing, the tape compartment door was broken off and apparently the drive belt must have corroded to the point that it no longer functioned at all. I started listening to the tapes on the more modern stereo we had at the time (which at that point was also somewhat outdated--seeing as how it still featured the capability of playing and recording on cassette tapes at a time when even CDs were becoming an endangered species).

But I kept finding myself thinking about my first tape recorder and how important it was to me. Since I still had the somewhat decomposed body of that first unit I was able to search for other examples of it on eBay. It seems like you can find pretty much ANYTHING on eBay if you look long and hard enough. There were certainly plenty of old tape recorders for sale, but if I didn't know that mine was a Model 3-5091A I would have been wading through hundreds (thousands?) of auctions for random tape recorders. Having the model number narrowed the search down greatly. It ended up being somewhat hard to find listings for the one I was looking for, but every once in a while one would show up. The condition of the ones I found would vary, and the prices also varied greatly. But I eventually was able to find one in great condition, one which even included the original box! Best of all, it was actually affordable. Heck, it cost even LESS than the one I bought in 1981! In 2012 (a little over 30 years after the original cassette recorder purchase) I went ahead and bought that recorder and suddenly owned a "brand new" version of that old friend from my youth.

It was very exciting to put some batteries into the unit, snap in the very first tape I ever recorded back in March of 1981. I had a lot of fun listening to those old tapes once again. Over the years since retrieving them from my parents' house I had listened to many of them, but actually hearing the sound coming out of the speaker of the same model of recorder that had recorded them in the first place made the experience all that much better and more satisfying for some reason. To this day I still like throwing an old tape into that recorder and listening to it to take a little audio trip back in time. It really has been a way to resurrect a small piece of the past for me.

Even after buying that "replacement" cassette recorder in 2012 I continued to occasionally search for General Electric Model 3-5091A units on eBay. And they do still show up. Even though I can't really claim to have a particular "need" to have another one, it's still kind of fun to go through the search process. A while back I saw one listed that seemed to be in pretty good shape and even still had the sticker over the top of the speaker that the one I bought in 2012 had. I put it in my watch list and saw the auction end and get relisted over and over. About a week ago I finally decided to pull the trigger and put a bid on it. The starting bid was only $7.80 (with a reasonable $9.55 shipping charge). I figured what the heck? Do I NEED another one? No. But then again maybe I might need to have some replacement parts if the 2012 one starts to have issues. It really can't hurt to have another one around I suppose. I won the auction a few days ago on March 13 and am now waiting for the third version of my GE Model 3-5091A to arrive. It just occurred to me a couple days ago that today, March 17, 2021 is actually the 40th anniversary of the day I got my first tape recorder (the day that was commemorated two years ago in the "Important Dates in History" post mentioned above. The latest purchase is expected to be delivered between tomorrow, March 18 and March 20. It wasn't done intentionally, but that's just a day or two or three after the 40th anniversary of the original's purchase! If only that auction had ended a day to two earlier I could have received it ON the actual anniversary today! Oh well, I'm still looking forward to seeing yet another brethren of my first-ever cassette recorder whenever it does show up... 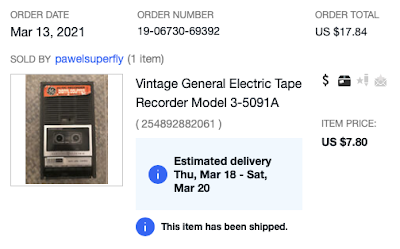 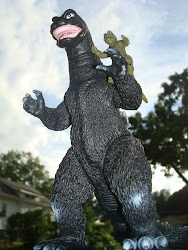 Glen
A stay-at-home father of two girls who loves old monster, science-fiction and horror movies (especially the bad ones). Just trying to navigate through the randomness of life, while bringing up his daughters to the best of his ability and sharing his interests with them.

PLEASE VISIT MY OTHER BLOG!